Artists & stock
This group is a natural offshoot of "Cercle et Carré" founded in 1929 by Michel Seuphor, an ardent spokesman for abstraction pitted against Surrealism. It finds its roots also in the group “Art Concret” founded in 1930 by T. Van Doesburg who advocated radical, purely geometric abstraction. Founded by Herbin and Vantongerloo in 1931, Abstraction-Creation intends to connect with a form of creativity and a language that would be truly free. In order to find this freedom, the artists have to give up objective representation. The two artists were soon joined by many European artists as well as a few Americans. Between 1932 and 1936, they published a review, “Abstraction-Creation, art non figuratif”, in which they expounded their theories. At its most popular, the group counted some 400 members. They organized large shows, gave lectures, presented their esthetic credo in various publications. Through their activities and visibility, they made of Paris a center for abstract art. 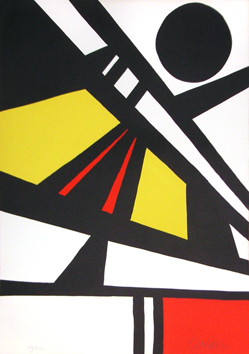