Artists & stock
The first art exhibition of Poor Art (Arte Povera) is held in 1967 in Genoa. The critic Germano Celant, organizer of this exhibition, also publishes at the same time, a manifesto in Flash Art ("Notes for a Guerrilla"), Germano Celant, Flash Art, November-December 1967, Milan). Being an artist of the Arte Povera, it is to adopt a behavior that consist to challenge the cultural industry and wider society of consumption, according to a strategy thought on the model of the guerrillas. In this sense, Arte Povera is a socially committed stance on revolutionary mode. This refusal to identify and this political position is manifested by an artistic activity which also favors the process, to say in others words, the creative act to the detriment of the finished object. Thus, Arte Povera is involved in the protest utopia in the late '60s and claims in its own way a tendency of contemporary Italian art in front of the supremacy of the market of American art. Arte Povera actors refuse to be locked in assigning an identity; they reject the qualification of movement. They raise the poverty of materials and resources to the level of art. Many Italian artists have participated in this experience, mainly between 1966 and 1971. 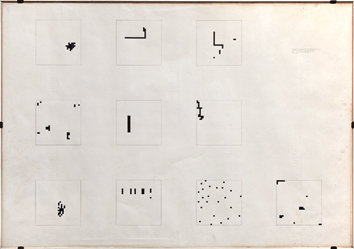