Artists & stock
In 1907, Picasso’s painting, Les Demoiselles d’Avignon, heralded the birth of Cubism, as a new art movement. Its founders were Picasso and Braque; they found their inspiration in l’Art Nègre, in early Iberian art, and in the works of Paul Cézanne, who once recommended: “Treat nature in terms of spheres, cylinders, and cones.” Until 1909, during what came to be called precubism, both artists worked on analyzing and breaking down form. Later on, they invented a new construction of the pictorial surface; that second phase is usually referred to as “analytical Cubism” and extends from 1909 to 1912. One of Braque’s statements is a good illustration of their preoccupations during those years: “I don’t paint things, I paint the interaction between them.” They used subdued tones within an almost monochromatic range of colors. The shapes became more geometric and they attempted to simultaneously present the different aspects of the same subject under different angles. In 1912, the third and last phase of Cubism, “synthetic cubism”, started. It lasted until 1925. In this final phase, figures were reintroduced in such a way as to create an ambiguous dialogue between their appearance and their essence. During the course of those thirteen years, cubists invented the technique of collage, they worked with trompe-l’oeil and stencils. They acknowledged the homogeneity of the objects by solely depicting their essential attributes in an effort to find their essence. At the same time, they used color freely. In 1912, Gleizes and Metzinger published their famous work, Du Cubisme, a book devoted to Cubism, whose influence, at that time and later, fueled further artistic explorations. 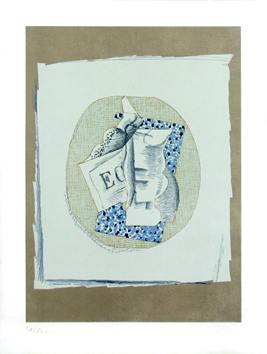