Artists & stock
In sculpture, the greatest changes occurred during the first three decades of the 20th century. Cubism, Russian avant-garde, the discovery of primitive art, all these important artistic phases, and many more besides, took sculpture away from figuration toward abstraction, away from a “solid” representation to one that is “open”. In the past, entirely determined by the desires of their patrons, sculptural works were often conceived to enhance some architectural element. With the 20th century, sculptors were able to finally free themselves from the constraints of creating purely decorative pieces. Sculptures audaciously and with simplicity occupied their own space. Giacometti explains the new way of conceiving sculpture: “Sculpture stands in emptiness. It is the space, which the artist digs out in order to construct the obect, and then the object itself, which are the actual creators of space.” The abstract works of Julio Gonzales perfectly illustrate this conquest of their own space. Each one was conceived so as to do away with the notion of “frontality”, so as to be observed from every possible angle, so as to surprise the observer and encourage him to walk full circle around it. Assemblages and metal constructions create new rhythms and unexpected angles in total freedom. Modern sculpture is best characterized by this fusion between space and form. This is made obvious in the wotks of Henry Moore, Marino Marini, Alexander Calder, Henri Laurens, among many others belonging to the first generation. They were followed by younger sculptors like Cjillida, Jacobsen, Chadwick, Lardera, etc). 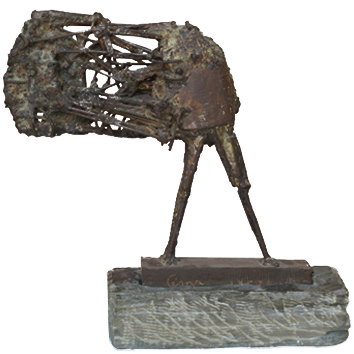