Artists & stock
In the 60s, a new figuration emerges in a international tense climate. The war of Algeria, the events of the Cold War, the Vietnam War lead to shocking images in the press. The advertising images of a consumer society continues to grow. And facing the frenzy and excitement of artistic activity around the image (film, video art, comics, Pop Art and New Realism), these painters also chose to express this in paint. Although the Narrative Figuration has never been proclaimed as a movement, the key moment of its emergence is the exhibition of "Daily Mythologies" presented in July 1964 at the Museum of Modern Art of the City of Paris, this event is organized by art critic Gérald Gassiot-Talabot and painters Bernard Rancillac and Hervé Télémaque in response to the triumph of Pop Art and American art that invade the national and international art. Thirty-four artists participate in this event, each coming from different geographical and aesthetic backgrounds. If, like their American counterparts, they put contemporary society and its images at the heart of their work, they differ by the refusal of a certain "art for art's sake." Indifferent to the lyrical abstraction and American gestural, hostile to the Abstraction of the School of Paris, they refuse to coldness of Pop, as stated by Gerald Gassiot-Talabot, "to the static American pop derision, they are "all" against the movement of precious life. " The artists create their works on large format, simple canvas, the use of acrylic spreads, rendering uniform similar to that of a uniform surface. In the mid-70s, each creator emancipated from this group. 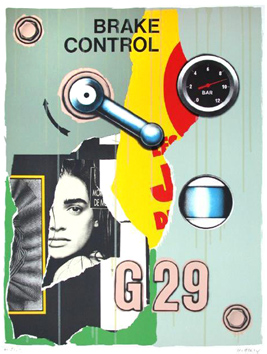