Artists & stock
Photography was invented in 1839 and progressively became a new artistic medium. Today, it has become a respected artistic form within contemporary art. Pictorialism as a photographic style was active between 1890 and 1914. “Pictorialist photography” had to be subjective, subdued, emotional. Pictorialist photographers wanted to be recognized as artists; they often showed artistic photos, one of a kind shots, in which they experimented with special effects and new technical processes. Between the two world wars, “plastic photography” became part of the international avant-garde scene. Thanks to the decompartmentalization of many artistic forms, artists working in different media could share their experiences. Out of it came the photomontage, a Dadaist technique. Some of the favorite subjects for this new breed of photographers were social and political in nature. Surrealists displayed a radically new conception of reality. Since the 1960’s, some photographers who came from the world of fashion and advertising, such as Richard Avedon, Irving Penn, Robert Mapplethorpe, have produced works that attempt to capture absolute beauty. “Manipulated photography” is a further esthetic evolution in photographic art which appeared around 1975. 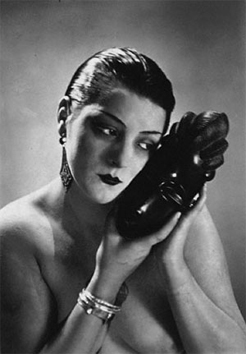