Artists & stock
Between 1905 and 1915, many artists in exile settled in Paris. Many of them were Jewish. But whether they were Bulgarian, Lithuanian, Russian or from other nationalities, they were all said to belong to the School of Paris. They gathered in Paris because they felt that was where they could find some favorable conditions to express their talents and the freedom to paint. In eyes, Paris had that quality of representing the myth of freedom. Hence Chagall’s famous remark: “I brought my things from Russia and Paris shed its light on them.” They met in Montparnasse and at Le Bateau-Lavoir, in Montmartre. For a few francs, they found shelter at La Cité Falguière or La Ruche. There, they socialized and discussed art. Blaise Cendrars would sometimes join them. They were poor, but there was a conviviality and a solidarity and generosity, that brought happiness to their lives. A few dealers and collectioners passionately encouraged and supported them. The cafés of Paris were also perfect meeting places for these artists. The first ones were La Rotonde and Le Dôme. Then came Le Select, Le Parnasse and La Coupole. Although the artists who belonged to the School of Paris were each passionately pursuing their own style and mode of expression, they all shared a common faith in Art as the universal language, the only language allowing communication between all men and peace in the world. 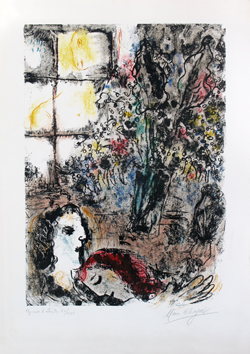