Artists & stock
André Breton created this literary and artistic movement in 1924 with the publication of his Manifesto of Surrealism. In it, he gave the following definition of surrealism: “Surrealism, n. Psychical automatism in its pure state, by which one proposes to express – verbally, by means of the written word, or in any other manner – the actual functioning of thought. Dictated by the thought, in the absence of any control exercised by reason, exempt from any esthetic or moral concern.” Enthused, many artists joined this new movement. In 1928, in Surrealism and Painting, Breton gave the Surrealist definition of art, as follows: ”It is the inner representation of the image as it presents itself to the mind.” Thus, Surrealists practiced automatic writing and automatic art creation, le cadavre exquis; they used collages, they created objects or sculptures whose function was purely symbolic. Through the years, they published many reviews. Their very first art show, La Peinture Surréaliste, took place in Paris in 1925. Between 1927 and 1935, the movement lost its cohesion because of political disagreement within the group. However by 1934 the movement had become international and in its European phase lasted until the Second World war. Many large shows were presented, among the most successful ones, London in 1936, and Paris in 1938, where the greatest artists from this movement were represented. During the war, many artists left Europe for the United States; their influence on American painting was deeply felt. Surrealism survived albeit chaotically until 1969. 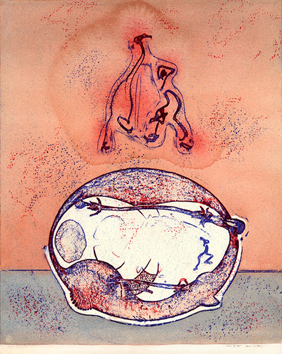